Making video games for a living is a dream for many. The demand to secure a job in a game studio is quite high and as a result it can be difficult to enter the game industry, especially if you do not have a good network. A couple of decades ago, the game industry was very small and there was no real formal educational path to it. Today, many universities offer videogame-related courses and degrees. The upside is that students are better prepared for a career in the game industry. The downside is that they are legion.

END_OF_DOCUMENT_TOKEN_TO_BE_REPLACED

This article on ethics in video games is an enhanced write-up of the talk I gave at the Game Developers Conference (GDC) in March 2019.

Videogames are one of the most popular forms of recreation in the world and they will generate over 150 billion US dollars in 2019, yet they often generate terrible press. For example, some games are accused of making players violent, or to turning them into addicts. I’ve been in the videogame industry for over 10 years and the latest game I’ve worked on (as director of user experience at Epic Games until I left on October 2017), Fortnite, is played by about 250 million players. It’s also under scrutiny by many concerned parents who fear that the game might have some negative impact on their children. Some parents have been reporting, for example, that their children play Fortnite at the expense of their education, health, or even personal hygiene. It saddens me that videogames can have a negative impact on some people’s lives but I’m also frustrated by the fearmongering I’ve been witnessing, most of it with no solid scientific ground. This fearmongering — and sometimes even scapegoating — around videogames can distract the public and lawmakers from identifying and addressing the real potential of  videogame play, and tech in general. As a result the game industry is often defensive when responding to the horrible things it’s accused of, which is understandable but fails to build a constructive dialog. We, videogame developers (i.e. all the professionals participating in crafting a game), have a responsibility as content providers to foster this dialog.

END_OF_DOCUMENT_TOKEN_TO_BE_REPLACED

Fortnite is one of the most successful video games in history, and this success fascinates and confuses many people who have made efforts to account for how a game could have become such a phenomenon so quickly. As the former Director of User Experience (UX) at Epic Games, where I worked on Fortnite from 2013 to late 2017, I would like to share the different steps that were taken by the Fortnite team to build what would later become the phenomenon we now know, through the lens of UX. Having a UX mindset means, in a nutshell, offering the best experience to the target audience of a product, service, system, or video game. A UX approach pertains to the usability of a system, its ability to engage its users (especially if the purpose of the system is to entertain), but also ethics and inclusion considerations (such as if the product is respectful of users and if it’s accessible). My background in psychology, my occupation as a UX strategist, and my personal work on the game likely bias my perspective since we are all susceptible to unconscious biases. However, this analysis, unlike those that have been proposed thus far, is a firsthand account that was presented in several Game Developers Conference (GDC) talks that I gave before Fortnite was released, and in my book The Gamer’s Brain: How Neuroscience and UX Can Impact Video Game Design (2017).

The Fortnite team had a precise vision and collaborated very closely with the UX team to deliver a game that would be true to this vision and that would appeal to many different types of players. My contention is that the success of Fortnite is partly linked to their efforts in adopting a UX mindset. My goal here is to explain how to develop such a game UX mindset and build a UX strategy to help game developers around the world delight their players more efficiently with the games they are crafting. This is especially crucial for independent developers who have fewer resources yet still compete with the thousands of games released every year.

I will detail here the three most important steps to develop a game UX mindset, which were taken during the development of Fortnite:

END_OF_DOCUMENT_TOKEN_TO_BE_REPLACED 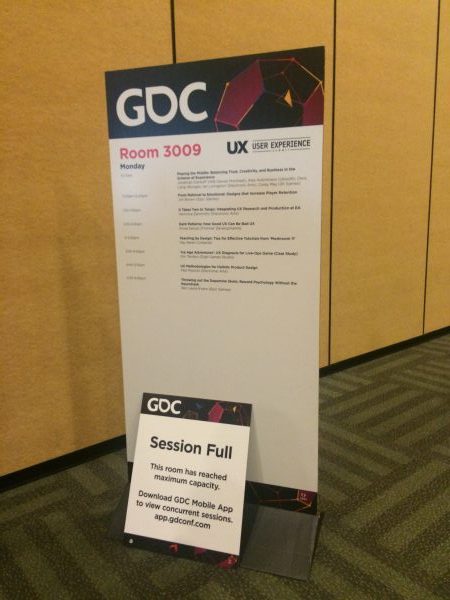 The UX Summit debuted at GDC this year and Anouk Ben-Tchavtchavadze and myself had the extreme honor and pleasure to serve as advisors for this inaugural year. The intent of the summit was to cover all facets of the user experience discipline within the video game industry. As you might know, UX aims to ensure that the design and business intent of your game is the one ultimately experienced by your target audience and does so by using knowledge from cognitive science and psychology, and by applying the scientific method (user research). It was a very exciting day for all UX practitioners and evangelists across our industry!

END_OF_DOCUMENT_TOKEN_TO_BE_REPLACED 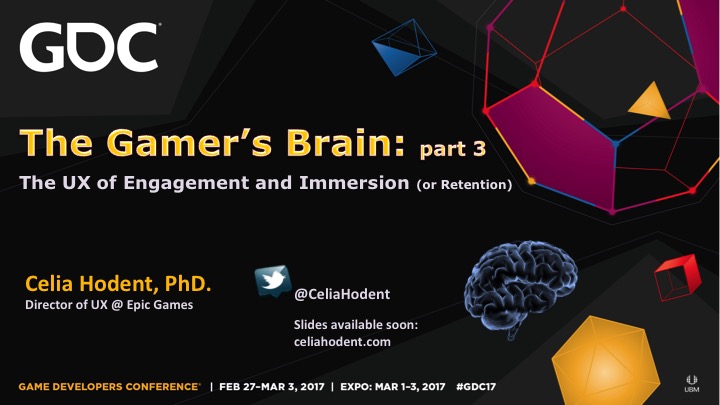 This is the last part of my GDC trilogy about the gamer’s brain (how cool is that!). A warm thanks to all of you who liked my previous talks, gave me constructive feedback, and supported me! 🙂

This post is a transcript of my talk with the slides. You can find transcripts of the first two parts of my Gamer’s Brain talks here and here. If you’re interested, you can also check my book. Thank you!

END_OF_DOCUMENT_TOKEN_TO_BE_REPLACED 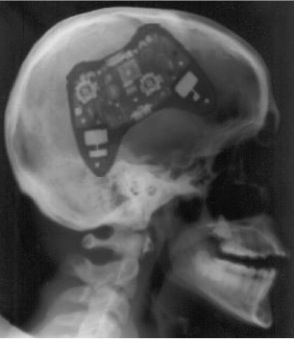 What is this article about?

Educators interested in using video games for educational purposes should be aware of the considerable difficulties in developing a fun and engaging game, and take into account the user experience (UX). Game developers interested in education should understand the principles of learning, and the importance of transfer when creating an educational game.

END_OF_DOCUMENT_TOKEN_TO_BE_REPLACED

On May 12th 2016, Epic Games hosted the inaugural Game UX Summit in Durham (NC) – which I had the immense pleasure and honor to curate – to discuss the current state of User Experience in the video game industry. This event brought together fifteen renowned speakers from various UX-related disciplines: Human Factors, Human-Computer Interaction, UX Design, User Research, Behavioral Economics, Accessibility, and Data Science. The keynotes speakers were the esteemed Dan Ariely, and Don Norman, who popularized the term UX in the 90s.

Below is my summary of all the sessions (with the edit help from Epic Games’ UX team members – special thanks to Ben Lewis-Evans and Jim Brown!). You can also watch most of the sessions here. The Game UX Summit will come back in 2017: Epic Games is partnering with Ubisoft Toronto who will be hosting next year’s edition on October 4-5, 2017. If you wish to receive updates about the event or if you would like to submit a talk, you can sign up here and be on the lookout for #GameUXsummit on twitter. 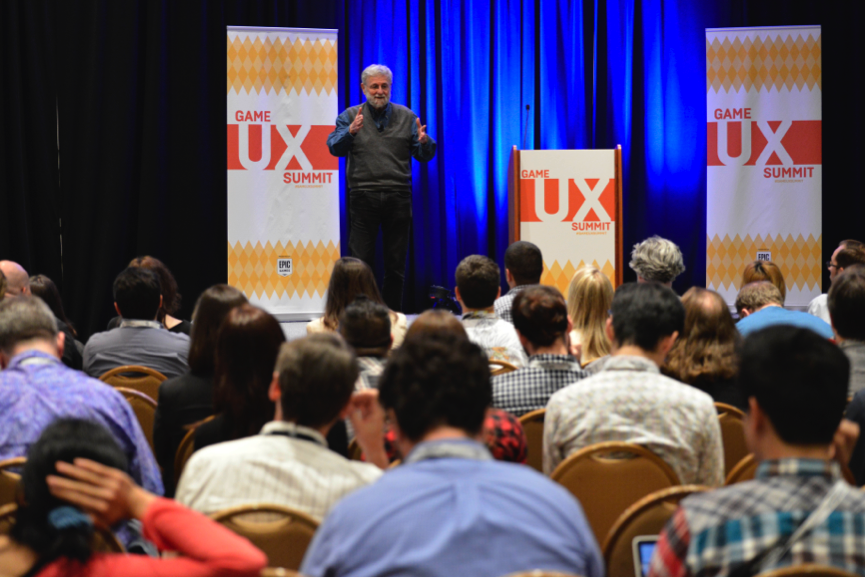 END_OF_DOCUMENT_TOKEN_TO_BE_REPLACED

I gave a talk about UX for game-based learning at Games for Change Festival 2016. While at the festival I sat down with Classcraft, whose mission is to transform the learning experience by using game mechanics. In the videos below (2 parts for a total of 20 minutes), I discuss about UX and why it is important to consider UX practices when developing educational games.

END_OF_DOCUMENT_TOKEN_TO_BE_REPLACED 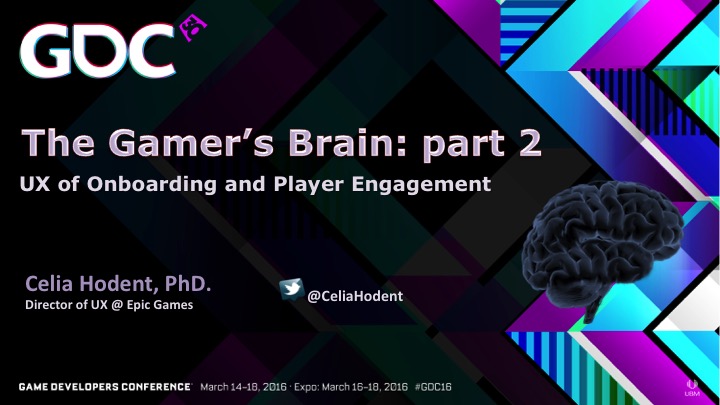 These are the slides from my GDC 2016 presentation. This session is meant as a follow-up to my GDC 2015 talk about How Neuroscience and UX Can Impact Design (hence, “part 2”). Since it seemed to generate interest, I wanted to do a deeper dive on one of the critical aspects of a game’s user experience: the UX of onboarding and player engagement. You can watch the video of this presentation here.

END_OF_DOCUMENT_TOKEN_TO_BE_REPLACED 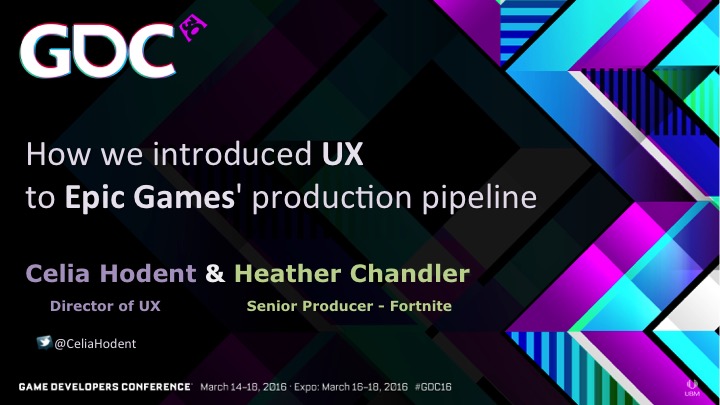 These are the slides from the my GDC 2016 presentation with Heather Chandler, Senior Producer on Fortnite (Epic Games). Therefore, this presentation is about both UX’ (Celia) and Prod’s (Heather) perspectives. You can watch the video of this presentation here. Also, if you’re interested in UX, go check our Game UX Summit happening on May 12th 2016 (we have an amazing lineup! :)).

END_OF_DOCUMENT_TOKEN_TO_BE_REPLACED

This article was originally published by Springer in February 2016 as part of the Encyclopedia of Computer Graphics and Games. Article reproduced here with their authorisation.

Cognitive psychology is a discipline dedicated to understanding the human mind via mental processes such as problem solving, language, perception, attention, and memory.

END_OF_DOCUMENT_TOKEN_TO_BE_REPLACED 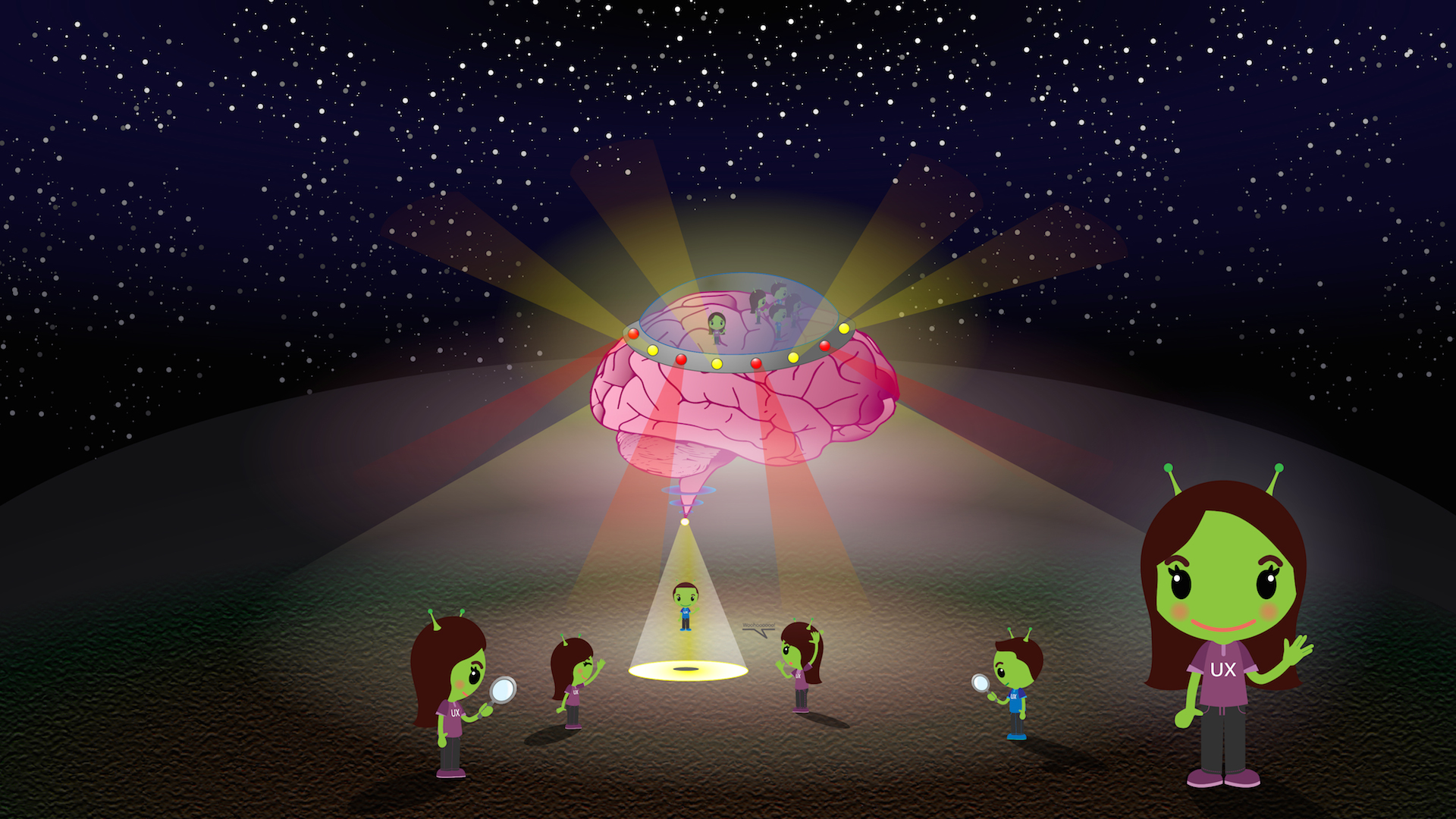 UX Invaders: We Come In Peace!

User Experience (UX) is becoming very trendy albeit fairly new in the video game industry, so there are still a lot of misconceptions regarding what it is (and what it’s not). I will try to tackle these misconceptions and convince you – if need be – that UX is indeed your friend.

To explain it in a nutshell, UX explores how it is like for the target audience (the players) to experience your game (and everything beyond, such as downloading the game, consulting forums, etc.). It uses neuroscience and psychology knowledge and applies game user research methodologies (e.g. playtests and analytics) to make sure that the game has good usability and is immersive (although I prefer to refer to it as gameflow).

When thinking about my experience advocating for UX (or neuroscience) in a game development team, there are 5 main misconceptions about UX I very frequently need to address:

END_OF_DOCUMENT_TOKEN_TO_BE_REPLACED 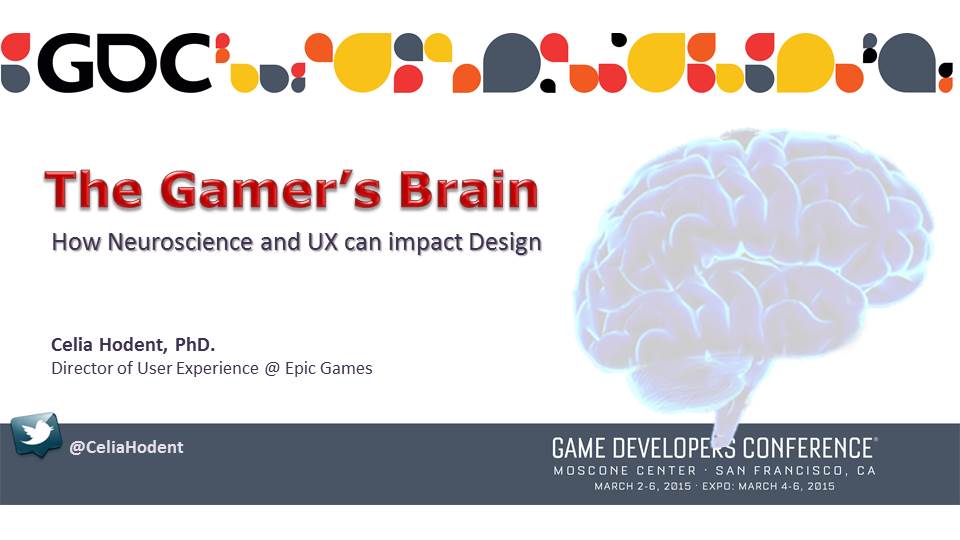 I’m sharing here my slides from my GDC 2015 presentation on video game UX (user experience). Since I didn’t find any good slide sharing plugin (speaking of bad UX…) I just added all the slides in jpeg and put my speaker notes below.  😉

END_OF_DOCUMENT_TOKEN_TO_BE_REPLACED 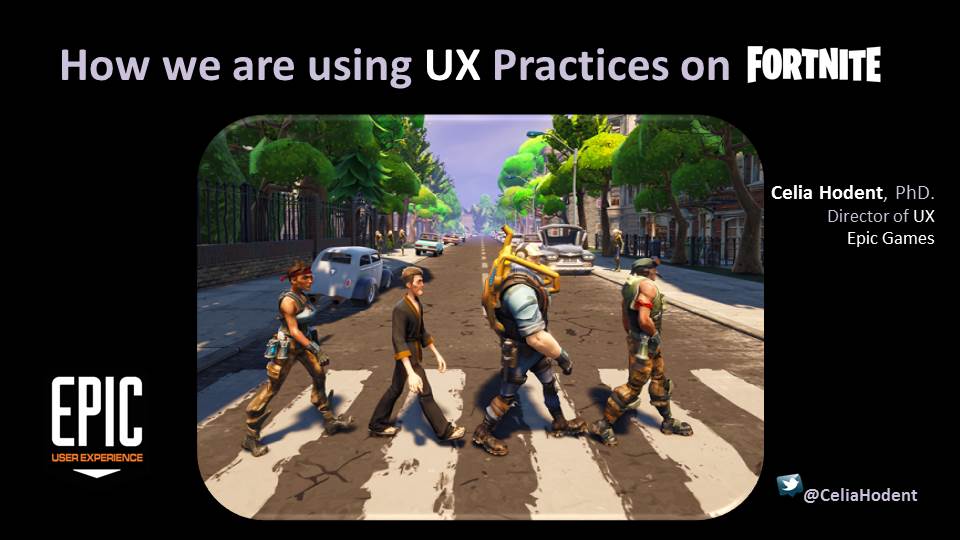 I’m sharing here my slides from my GDC Europe 2014 presentation, which I also gave at MIGS 2014 (How we are using UX Practices on Fortnite). Since I didn’t find any good slide sharing plugin (speaking of bad UX…) I just added all the slides in jpeg and put my speaker notes below.  😉

The content of this presentation is a mix of academic theories, Ubisoft Design Academy training about usability, and my own experience interacting with game teams. The following is certainly not set in stone – it’s a constant work in progress – and I’d be very interested to get your feedback.

END_OF_DOCUMENT_TOKEN_TO_BE_REPLACED

I'm an expert in game user experience (UX) & applied cognitive science (human factors).
I'm PhD in Psychology, consultant, & the author of The Gamer's Brain and The Psychology of Video Games. I'd be happy to help your project be successful, or speak at your event. You can contact me here.
Read more 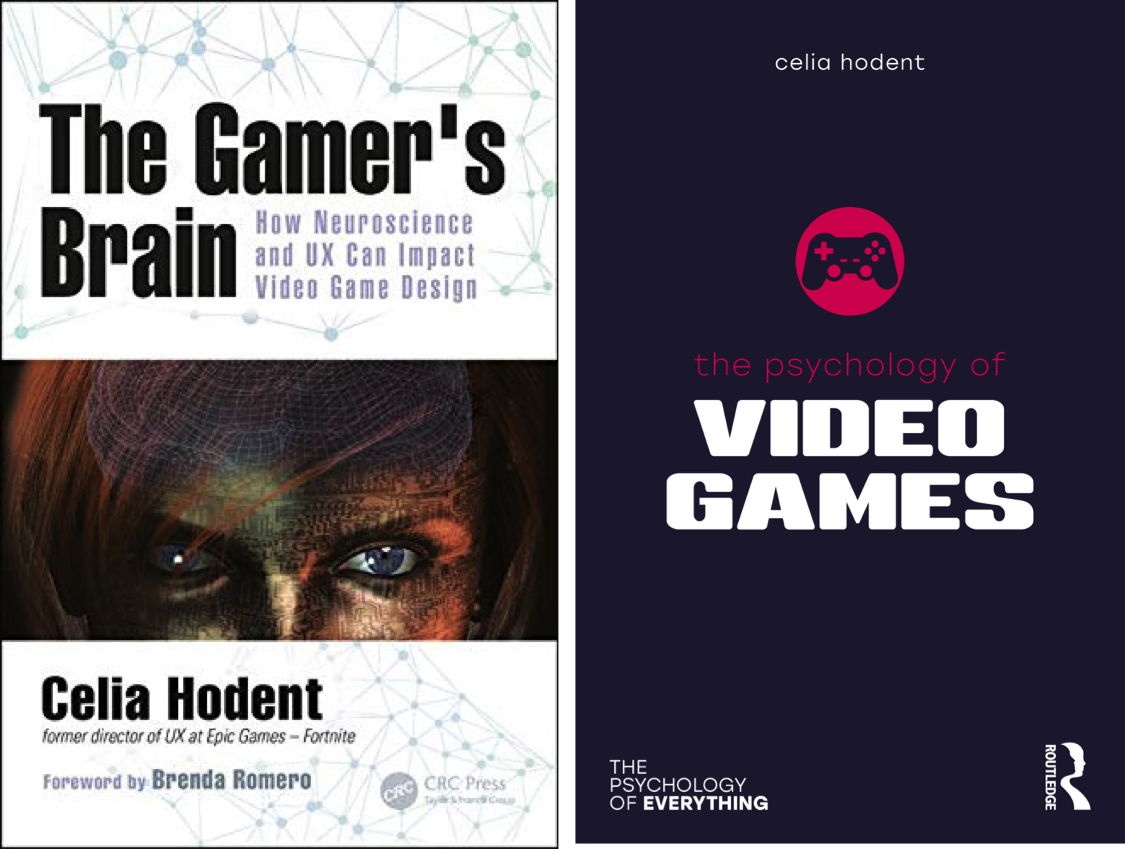 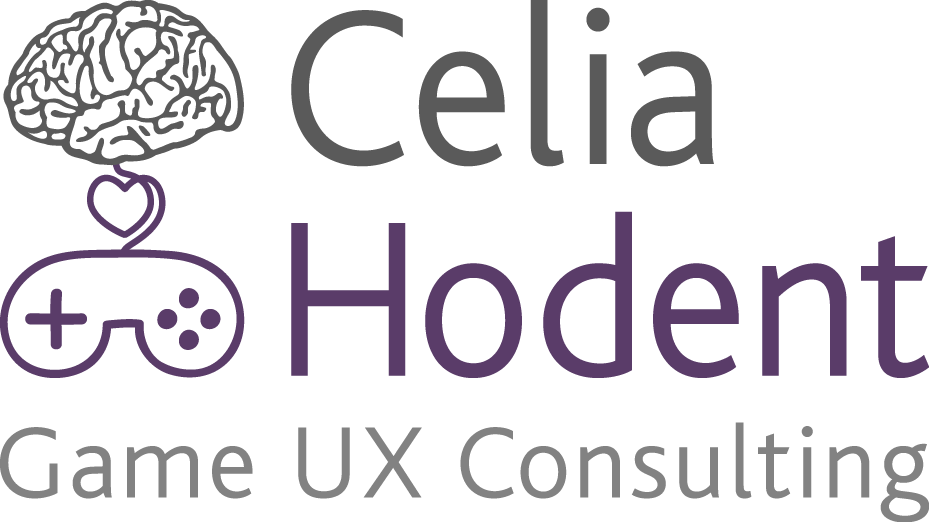